After the popularity of Star Trek IV, it’s a shame that the most unpopular Trek film had to follow with Star Trek V: The Final Frontier.  For all intents and purposes it has to be said that, yes, Star Trek V is a terrible, awful film.  But I like it.  Yes, it’s pretty stupid, with Kirk, Spock and McCoy singing Row Row Row Your Boat.  Yes, the whole idea of the Starship on a journey to find God is pretty silly and redundant.  But for all its dumbness, I feel a certain nostalgic connection with this film.  My parents took me to all the other Star Trek films, but I was too young to remember them.  This is the first Star Trek feature I saw and actually remembered.  I was about 8 years old when this movie came out.  I knew enough to know it wasn’t a great movie.  But for what its worth I liked it.  And to this day, I think it’s a underrated.  I could watch this movie more times than the boring and long winded Star Trek: The Motion Picture.  It’s certainly more tolerable to me than the mediocre Star Trek: Nemesis.  This is definitely a crappy film.  But I did learn something while I was in film school…you are allowed to enjoy shit, as long as you recognize in the back of your mind its shit.  Star Trek V is a shitty film.  But I love it.

I don’t know exactly on what level this movie appeals to me.  Maybe it’s the search for God aspect that I find intriguing.  I always found it funny that the Great Barrier might have supposedly been this far off place, but with the time they spend traveling it seems like it’s right on their back doorstep.  They’re also just as surprised when they manage to fly a starship through it.  You’d think somebody would have sent a probe in to analyze the interior.  Oh well.  There’s logic gaps galore in its story.  The main threat of the Klingons is some punk kid Klingon who for some reason has enough power to overrule his elder Klingon crew who clearly know he’s an idiot for trying to take on Captain Kirk.  There’s Sybok, whose power to mind control people is never really explained.  There isn’t really much in the way of character work either.  I don’t think anyone really learns anything from this experience, except for Sybok who finds out he was duped this whole time, and whose sacrifice doesn’t really do squat to stop the alien “God”.  I suppose you could say it’s the adventure nobody really asked for and it turned out nobody needed after all.  Nobody’s really on a search to renew their faith.  It’s basically an inconsequential haphazard Star Trek adventure.

But I think there has to be at least one Star Trek film that takes us into the realm of the silly idea.  After all, The Original Series was loaded with silly episodes (Spock’s Brain anyone?), or the one where we discover the Greek Gods are actually aliens that came to Greece long ago.  Tribbles.  Need I say more?  This is the one reason I like this film so much…because it is a silly pointless adventure.  I don’t think it really takes itself that seriously either.  It’s got the best, most silly line in all of Star Trek.  Kirks, “What does God need with a Starship?”  There is the one thing that I think keeps this film together in the spirit of Star Trek, and it’s the bonding between Kirk, Spock, and McCoy.  For all the people who hate the sing a long campfire scene, it’s a silly scene yes.  But the friendship and bond between these men is true to the series.  Kirk brings up some sentiments that he keeps them around because he feels its his fate to die alone.  It’s why I find some charm in the end, after Spock saves Kirk from the alien presence at the end, Kirk says to Spock, “I thought I was going to die alone.” Spock: “Impossible.  You were never alone.”  These guys are family. 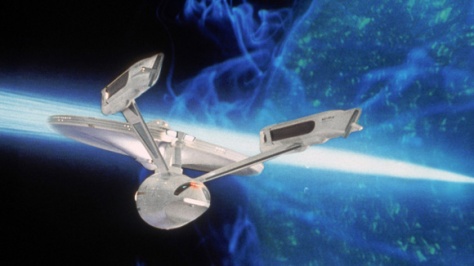 It’s kind of funny too that the Enterprise falling apart seems like a perfect metaphor for this movie, where everything is broken and nothing really works right.  You almost have to wonder if this might have been a nod to the film itself.  To be just outright bad as a film is a gift that only The Original Series could bring.  You don’t find enough episodes that are bad in TNG, but worse they are just mediocre.  A mediocre film to me is far worse than a film that’s just straight bad.  With a mediocre film, there’s always a promising idea but poor execution and not firing on all thrusters.  A bad film will fire on all thrusters and wind up blowing up the ship.  Some films are just made that way.  But while the thing is going down in flames….it doesn’t mean you can’t enjoy the ride.

This film was also getting near the end of the Original Series films, and you can see the cast was starting to wind down and probably wanted to make a film that didn’t have to be taken too seriously.  I actually think The Undiscovered Country has more of the “We don’t give a shit anymore” feel from the cast than this film does, despite having a better story.  But I always felt that I could take the worst Star Trek film over the worst Star Wars prequels any day.  At least there’s some attempts at acting in this movie.

Overall my consensus is, Star Trek V: The Final Frontier is a giant turd.  And what a beautiful, glorious flaming turd it is too.