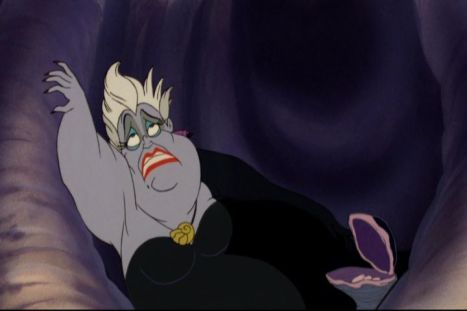 Well, I suppose I’m over my childhood trauma that was Ursula.  As I posted awhile back, she’s the one Disney villain that completely terrified me as a little kid.  Took me awhile to get over that one.  Maybe I’m just weird that way.  Or insane.  Or both.  But anyhow it doesn’t matter.  This is just another bit of a random post.  It’s quiet again this week.  I’m trying to work on a personal project in the midst of another project that’s in the works.  So far this new idea…is just okay.  Gonna take me some time to figure out the story and what it wants to be.  Bah.  I hate not knowing what a story is supposed to be.  But I suppose the search for the story is all part of the fun of it.  I SUPPOSE.  Sheesh.

I’ve been on a Breaking Bad high as of recently.  Last night’s Rian Johnson episode blew my mind at how good it was.  Extraordinary.  Between this and his film Looper which came out last year, this is a director to definitely keep your eye on.  I’ll be watching this guy for sure.  He’s phenomenal.  Last nights episode was absolutely gripping, showing without having to tell.  It’s the subtext and the fact that this show actually makes you think for a moment that really amazes me (although trust me, sometimes I’ve had to go on the internet afterwards to confirm certain aspects.  Hey I can admit it!)  The episodes end made me long to make a film where just everybody dies or is insane.  And make it a cartoon.  Yes, perfect!  Although admittedly there are times I wonder about that.  What’s my obsession with making dark cartoons.  Maybe not always dark, but sometimes complicated scenarios.  I long to create a masterpiece of television like Breaking Bad.  Seriously that show amazes me.  I want to make animation that powerful, even though Breaking Bad is not animation.  Somewhere I ask myself what I’d like to be.  Maybe Pixar’s dark evil twin.  I had some people comparing Jellyfish Girl to a Pixar film, at least until they got to the end.  That was satisfying to hear 😉

I suppose there’s not much more I can talk about.  This is expected to be a quiet week unless I see a movie that blows my mind.  Oh wait!  I did!  BLUE JASMINE!  Go see it.  It’s Woody Allen’s latest, and it’s a real treat.  It’s as funny as it is sad.  Jasmine is such a wonderful, complicated character.  It’s a real genuine, honest depiction of a melt down into complete psychosis.  It’s just really good.  Go see it or watch it when it arrives on DVD.

I’ll see if I can find more to write about this week if I’m not to busy.  Have a good week everybody.