UPDATE:  Minkyu Lee has posted his film Adam and Dog online.  Watch the film, then check out my review below! 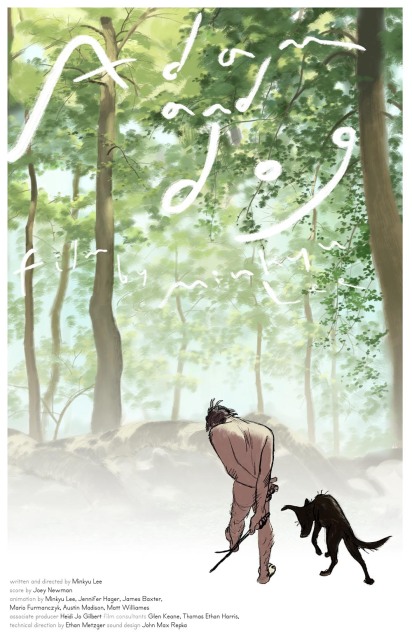 I was given the opportunity yesterday to check out the animated short Adam and Dog, directed by one of my former Cal Arts peers, Minkyu Lee.  This film is nominated this year for the Academy Award for Best Animated Short Subject.  I’d like to express thanks to some of my former classmates who worked on the film and offered to show it to me after I wrote a post about the film early last month.  After I finished watching the film, I had a good long talk with my friends about it, and I asked why it was important for them to do this and help Minkyu make this film possible.  One of the nicest things I heard about it was that for some people who worked on it they were inspired to go out and actually make their own film.  It’s as if working on someone elses own personal short was an awakening and a realization they also had it in them to make their own film.  More animators out there, I think, could really use a film like this as an inspiration.  What it can tell you that the real, true art of animation doesn’t come out of collaboration.  It always begins with the vision of one person.

What did I personally think of the short?  I liked it.  It was very well made and it has a nice story.  I have some issues with it, but I thought the film was emotionally miles above Disney’s Paperman.  To me, Paperman was a film that relied too heavily on its polished look, and the emotional undercurrent of the story felt, in my opinion, completely fabricated.   Adam and Dog feels much more personal and sincere in its telling, and it never has any reason to compromise its own vision.  It’s a good film and its worth seeing.

Let me get into my review.  I’m going into Full Spoilers here, so if you‘re planning to see it and don’t want it spoiled for you, you might want to stop reading here.

Adam and Dog is the story of the first dog in the Garden of Eden, and his meeting with Adam.  It’s a simple story about the very first relationship ever between a human and a dog.  Adam discovers all the things dogs like…being scritched behind the ears…playing fetch with a stick, etc.  The dog starts out as a kind of loner creature until he finds Adam and the two of them form a bond.    Then of course, Adam meets Eve and the rest is history.  Well, almost.  Like any human relationship, Adam gets infatuated with Eve and wants his four legged friend to go away for a little while to be alone with her.  By the end, when the banishment from the Garden takes place and Adam and Eve are left alone in a barren world, the dog voluntarily joins them, and the first family bond between a dog and his masters takes place.  Of course, minus a female dog for Adam’s dog to procreate with, but that’s another story!

I can say I’m a little biased in liking this story having been a dog owner all my life.  There are plenty of moments here I could relate to that we can all identify with our dogs that makes it a really charming little story.  I heard that some people complained they didn’t know the story took place in the Garden of Eden.  Minkyu tries to hint enough at it without fulling giving it away, and there are a few extinct creatures that show up, like for instance the giant wolly mammoth that passes by the dog.  But it’s a bit of a challenge to keep the fantastical elements of the myth at bay since the story wants to try and keep itself more grounded.  The subtlties in communicating the Garden have both benifits and drawbacks.  The problem is if so many people didn’t get it was the Garden of Eden, it might have been playing itself a little too subtle, and its a problem since the Adam and Eve myth plays an important part with the ending of the story.  Without understanding that, the audience looses some of the impact of the more powerful scenes in the film.  For instance, like the scene towards the end when it started to rain with lightning, and we see Adam and Eve running away through the woods covering themselves.  When Adam turns his head and we see his distorted face, we know right away what happened without having seen anything.  It’s really great filmmaking but if you don’t know what’s going on, the scene won’t make much sense, and it‘s an easy thing to miss.  The good news, however, is that the Adam and Eve story is not terribly important in understanding the relationship between Adam and Dog, which is the center of the story.  And if you didn’t get they were in the Garden, it can still be read as a simple relationship story between a wild dog and the meeting of his master.

The main problem I have though is that the film feels a little too simple and straightforward.  The story plays on the framework of the Adam and Eve myth, but when the actual Myth part of the story takes over at the end of the film, the story of Adams relationship with Dog kind of takes a backseat and doesn’t seem to connect with the act of the Banishment from the Garden taking place.  The film sets itself up to be about the relationship between Adam and Dog.  But once Eve arrives, the story is put on hold while Adam runs off with Eve, and Dog has to wander aimlessly for a little while until Adam and Eve are banished.  It’s only after that event the story picks up again when Dog reunites with the couple.

Once Adam leaves, there’s somewhat of disconnect to what’s going on.  Dog seems more confused than upset that Adam’s disappeared (which makes sense since they haven’t really spent enough time together to fully bond).  But we don’t see any bigger emotional conflict going as a result of their relationship.  The real conflict of the story (the banishment) has nothing to do with either of them, and the two events happening side by side never really meet.  I was hoping the story would go to a more emotionally gripping place, or that somehow the Adam and Dog story would relate to the Original Sin act, and how that might in some way affect Adams relationship with the dog before he’s banished.  Without that, there really isn’t any common ground to what’s happening.  If the film had something to say about using a religious backdrop for the story, I kind of wanted to know why that setting was chosen and what Minkyu wanted to say about telling the Adam and Eve myth from a dog’s perspective.  As it stands, the Adam and Eve Myth feels more like a clever centerpiece for a story that really could have taken place in any time period.  It’s the story of mans first relationship with a dog I guess, but I couldn’t understand how that was supposed to connect with the larger biblical story, and the ending of the film just didn’t give me enough to think about.

But other than that, it’s a beautiful short, and Minkyu really went out of his way to create some stunning visuals.  He is an outstanding animator and filmmaker.  While he had some help, he deserves a tremendous amount of credit for what he’s accomplished here, and that his own personal project managed to achieve one of the highest honors bestowed on a filmmaker.  Whether or not he receives the award, the fact that he made a film on his own without the help of a studio, and that its out there among the masses.  Thanks to the Oscars, it has the benifit of being seen by millions of people.  It really is an accomplishment on its own, and its an inspiration to others.  My personal congratulations to him for making this film, and I look forward to seeing where this takes him in the future.