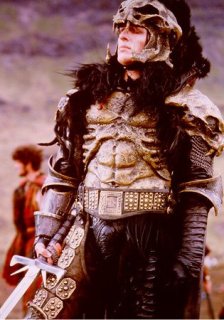 What I love most about the movies is the one thing that can make or break its story…a great villain.  A great, memorable movie villain is hard to come by.  I see so many films every year, where the main threat of the film hardly makes an impact on its viewer.  Many times, they’re just boring and uninspired.  They limp and crawl on the screen, and we can only imagine what greater threats they could have been had the writers discovered their potential.  A great hero is only as good as its villain, and regularly on this blog I want to single out what I consider the most badass, evil scumbags and major sons of bitches who get in our heroes way.  There’s no better way to start than with one I just recently discovered…my new favorite scum lord of the silver screen…Krugan from Highlander.

Krugan is played by the unstoppable Clancy Brown.  Before he made an impact as the nasty Captain Hadley in The Shawshank Redemption, it was in Highlander where he played the crazed immortal hellbent on bringing darkness in a world where there can be only one.  There are a lot of things I love about this character.  One of them is how he changes over the different time periods.  We first meet him in early Scotland as a ruthless warlord mercilessly killing people in his path.  The clan he came from was said to toss children in a pit full of maniacal dogs and watch them tear them apart for amusement.  Yeesh.  The one thing that doesn’t change is his maniacal sociopathic nature as he lives for killing throughout the centuries. 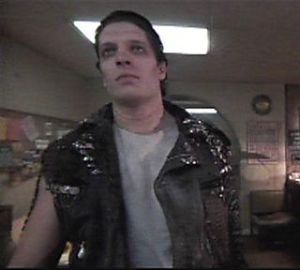 Once in present day New York, his demeanor changes into a death street punk, living on the edge in a world where he can’t be killed.  There’s a great scene where he’s kidnapped Macleod’s (Christopher Lambert) girl and takes her on a wild ride through the city, driving into oncoming traffic and causing collisions left and right…all the while where she’s screaming and he’s living dangerously laughing his ass off.  It’s fascinating as we get to watch a guy free to break all rules of society and mocking the rest of the world.  There’s another great scene in the church, putting his feet up on the pews and taunting Macleod.  At the end he takes the hand of a priest and licks it.  It’s a great scene, and it’s so much fun watching Clancy Brown chew up the scenery to make every moment count.

Those little touches are the thing that really sell the character, as we watch this evil scumbag do whatever he wants (no matter how cruel or obscene) and enjoying every moment of it.  That freedom to do what he wants is where I feel the audience was able to identify with and latch onto this character.  Even though we know everything he does with that freedom is horribly wrong, it’s the one thing we love and envy most about this character.  If you had the power of immortality, would you do everything you could to contain it?  Or would the world become your personal playground?  For me, it’s a guilty pleasure getting to watch him create chaos and destruction in his wake, and I’m certain many others share in that love for a guy who can be as bad as he wants with no one to stop him.

It’s these qualities that make Krugan work so well as a villain.  Even though he is essentially merciless and coldblooded, he still has many layers, and many different incarnations that make him into a fully rounded character.  At his core, he’s like a kid without any responsibility or rules.  You can probably only imagine what he was like as a kid, as he probably impaled himself on objects on a regular basis…and all for the fun of it.  The final battle is epic as Macleod has to face someone who is not only 1000 years older, but 10x as powerful because of it.

Clancy Brown has always been one of my favorite actors.  In this role he brings just as much menace as there is humor.  The gravely deep voice is a trademark of his, and while most of his villains are played with straight seriousness, this is one where he was really able to go to town to be as completely maniacal and psychotic as he could.  For those of you who haven’t seen Highlander yet, watch it and see a great character at work.  Krugan is one of the great movie villains, and I’m glad to have finally discovered him after all this time. 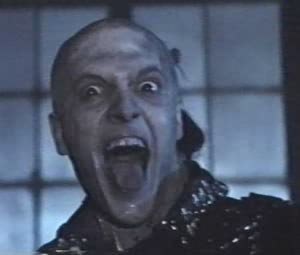